From Zelda Dungeon Wiki
Jump to navigation Jump to search
Want an adless experience? Log in or Create an account.
Rampaging Malice 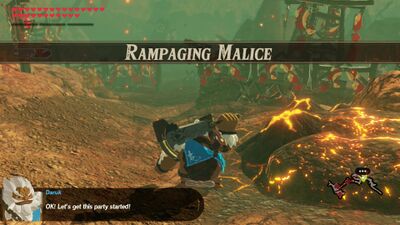 "There is a report from the Gorons of a suspicious Guardin sighting on Death Mountain. The Guardian could hinder the ore mining if left unchecked... Daruk heads to Death Mountain to deal with it."

Rampaging Malice is a challenge scenario of Hyrule Warriors: Age of Calamity, unlocked by completing The Future of Hyrule scenario.

Completing the challenge will unlock the Defeating Destiny and the Guardian Graveyard challenges.