From Zelda Dungeon Wiki
Jump to navigation Jump to search
Want an adless experience? Log in or Create an account.
Goron-Style Barbecue 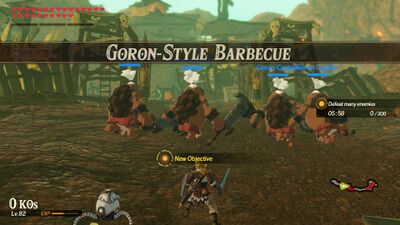 "The Gorons are planning on hosting a barbecue, but there are monsters inhabiting the perfect spot for it. Clear out those monsters to make the venue safe for the feast!"

Goron-Style Barbecue is a challenge scenario of Hyrule Warriors: Age of Calamity, unlocked by completing the Each Step Like Thunder scenario. Play as any warrior and defeat 300 enemies in the allocated 6-minutes of time. Fire Moblins and Fire Wizzrobes will both appear along the way. Once 200 enemies are defeated, a Igneo Talus will appear and will need to be defeated to complete the challenge.