From Zelda Dungeon Wiki
Jump to navigation Jump to search
Want an adless experience? Log in or Create an account.
Elemental Uproar 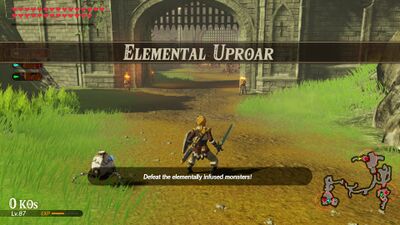 "Perhaps as a result of Calamity Ganon's influence, various fire, ice, and electric monsters have gathered. Take advantage of the monsters' weak points to wipe them out quickly."

Elemental Uproar is a challenge scenario of Hyrule Warriors: Age of Calamity, unlocked by completing the Zora Mettle challenge.

Play as any three warriors and fight off the elemental enemies. Each warrior will need to capture one of the three outposts, which are guarded by weaker elemental enemies. Next, nine larger enemies will need to be defeated, which includes two Fire Moblins, two Electric Moblins, and two Ice Moblins. This will leave three major enemies remaining, including an Igneo Talus, Ice Hinox, and Electric Lynel. Defeat all enemies to complete the challenge.