From Zelda Dungeon Wiki
Jump to navigation Jump to search
Want an adless experience? Log in or Create an account.
Link: Two-Handed Weapons 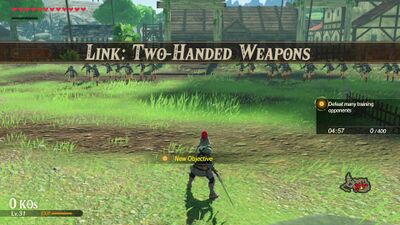 "The sworn knight of the princess must be an expert in a wide array of weaponry. Link will train with a two-handed sword, which prioritizes attack power."

Link: Two-Handed Weapons is a challenge scenario of Hyrule Warriors: Age of Calamity, unlocked by completing the first four scenarios in Chapter 2.

Link must defeat 400 Hylian Soldiers in the allocated five minutes of time. Hylian Captains will also spawn after defeating a number of soldiers.

After defeating 400 enemies, Daruk will appear and Link must defeat him to complete the challenge.