From Zelda Dungeon Wiki
Jump to navigation Jump to search
Want an adless experience? Log in or Create an account.
Pursue the Yiga Clan! 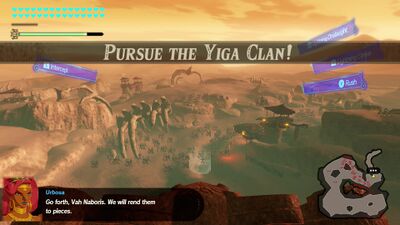 "Among the many dangers the desert is home to, the monsters and the Yiga Clan stand out. Urbosa takes command of Divine Beast Vah Naboris and sets out to clear the desert."

Pursue the Yiga Clan! is a challenge scenario of Hyrule Warriors: Age of Calamity, unlocked by completing Destroy the Yiga Clan! Play as Urbosa and pilot the Divine Beast Vah Naboris. To complete the challenge, 3,000 enemies must be defeated within the allocated 6-minutes of time.

Naboris can regularly use the Lighting Strike while aiming at the enemies. However, simply using the Lightning Onslaught works better, as it recharges quickly and it gets ride of almost all enemies that are nearby. The Blue Moblins will launch explosive barrels towards Naboris that it can block with its Intercept ability. When charged, Naboris can use a Special Attack to launch a massive attack, but the Lightning Onslaught is still preferred. Moldugas will occasionally appear and can ram up again the divine beast to deal damage, but they aren't too much of a threat.

Completing the challenge will unlock the Chief-of-the-Dunes Battle.