From Zelda Dungeon Wiki
Jump to navigation Jump to search
Want an adless experience? Log in or Create an account.
The Chief-in-Training 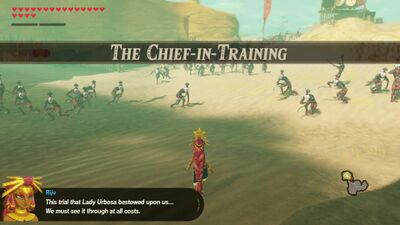 "Riju works hard to become a worthy chief of the Gerudo. To challenge her, Urbosa tasks Riju with defeating the Yiga Clan members that are disturbing the Gerudo Desert's peace."

The Chief-in-Training is a challenge scenario of Hyrule Warriors: Age of Calamity, unlocked by completing the Water and Fire scenario. Play as Riju and fight off members of the Yiga Clan. Riju will need to defeat 400 enemies within the 10-minutes of allocated time, which includes several Yiga Blademasters. Sooga will appear, but will run away after some damage has been dealt to him. After defeating 400 enemies, Sooga will re-appear and will need to be defeated to complete the quest.