From Zelda Dungeon Wiki
Jump to navigation Jump to search
Want an adless experience? Log in or Create an account.
Nap Quest! 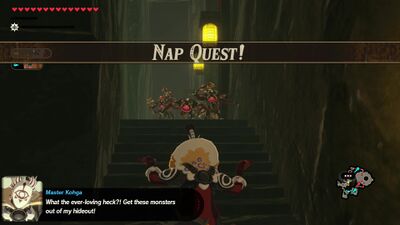 "The Yiga Clan hideout has been taken over by monsters! Master Kohga resolves to deal with the problem himself. After all, the hideout is his favorite place to nap..."

Nap Quest! is a challenge scenario of Hyrule Warriors: Age of Calamity, unlocked by completing Master Kohga's Training challenge. Play as Master Kohga, along with any other unlocked warrior. The two warriors will need to defeat the four wizzrobes that appear within the 5-minutes of allocated time. Then defeat the large Stone Talus that appears to complete the challenge.