From Zelda Dungeon Wiki
Jump to navigation Jump to search
Want an adless experience? Log in or Create an account.
Defend Akkala Citadel 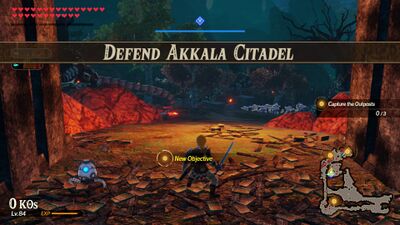 "Akkala Citadel is known for being impregnable, but that legacy only exists thanks to spirited defenses. Repel the latest monster assault, and add to that legend!"

Defend Akkala Citadel is a challenge scenario of Hyrule Warriors: Age of Calamity, unlocked by completing The Great Plateau scenario. Play as any two warriors and defend the Allied Stronghold. Additionally, the two warriors will need to capture the three outposts, which are controlled by Silver Bokoblins, a Black Hinox, and a Guardian.