From Zelda Dungeon Wiki
Jump to navigation Jump to search
Want an adless experience? Log in or Create an account.
True Strength 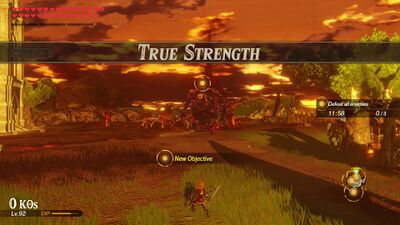 "The strong enemies continue to grow in power and focus on you! Win the battle, and prove that you're the strongest warrior around."

True Strength is a challenge scenario of Hyrule Warriors: Age of Calamity, unlocked by completing all four of the final Divine Beast challenges, including Molduga Deluge, The Power of Three, A Fiery Reckoning, and Through the Storm.

Play as any warrior and fight off three large bosses, including a Malice Hinox, a Malice Frost Talus, and Malice Lynel. The three will all appear in the field and after a short while, will all attack at the same time.

Completing this challenge will unlock the Versus Harbinger Ganon challenge and the Hyrule Institute of Tactics Research quest.