From Zelda Dungeon Wiki
Jump to navigation Jump to search
Want an adless experience? Log in or Create an account.
The Royal Escort 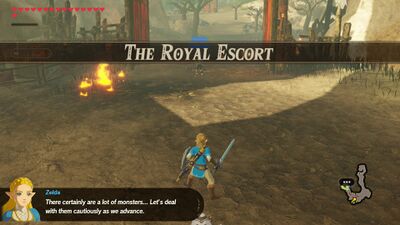 "Zelda is preoccupied with important research. Can Link keep her safe as the forces of evil loom ever closer?"

The Royal Escort is a challenge scenario of Hyrule Warriors: Age of Calamity, unlocked by completing the Messenger's Escort.

Play as Link and escort Zelda to the targeted location. Along the way, the Yiga Clan will attack, initially with a pair of Yiga Blademasters. Sooga will make an appearance, closer to the final target, alongside another Yiga Blademaster. Once Zelda reaches the target, the scenario will be complete.

Completing the challenge unlocks the Frog Side Effects quest.