Fruit for the Princess!

From Zelda Dungeon Wiki
Jump to navigation Jump to search
Want an adless experience? Log in or Create an account.
Fruit for the Princess! 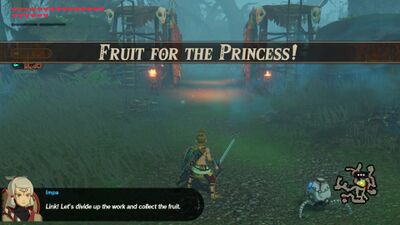 "Impa and Link venture into the forest to gather the ingredients to make one of Zelda's favorite meals. They'll need a variety of fruits, including bananas. And where one finds bananas, there must also be..."

Fruit for the Princess! is a challenge scenario of Hyrule Warriors: Age of Calamity, unlocked by completing the Win Back the Mighty Bananas! challenge. Play as Link and Impa and collect the fruit from the three crates marked on the map. After collecting the fruit, defeat the four Moblins that appear, including the Ice Moblin and Electric Moblin.

After the Moblins are defeated, make your way to the exit at the southwest portion of the map. Defeat the Yiga Footsoldiers and Yiga Blademasters that appear along the way. At the exit point, do battle with Sooga and another Yiga Blademaster. Once defeated, this will complete the challenge.