From Zelda Dungeon Wiki
Jump to navigation Jump to search
Want an adless experience? Log in or Create an account.
Innkeeper's Request 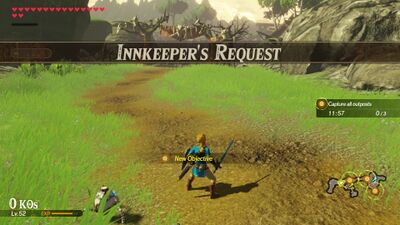 "The inn's proprietor is troubled by monsters outposts to the west of town. The proprietor is expecting an important guest soon and asks that the outposts be captured quickly."

Innkeeper's Request is a challenge scenario of Hyrule Warriors: Age of Calamity, unlocked by completing the Akkala Tower mission. The player's character must capture the three outposts within the 12-minutes of allocated time. The first outpost has a bunch of Blue Bokoblin, with an over-sized Bokoblin serving as the outpost leader. The second outpost has some Blue Lizalfos, with both a Blue Moblin and Fire Moblin in the base. The last base has a bunch of Electric Lizalfos along with an enemy Lynel.