From Zelda Dungeon Wiki
Jump to navigation Jump to search
Want an adless experience? Log in or Create an account.
Leave None Behind 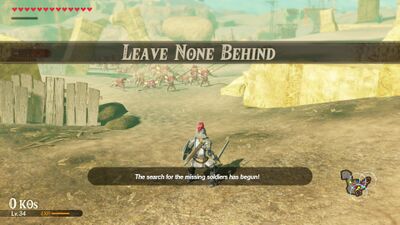 "Soldiers have gotten lost while on the march. Rescue the missing units and reunite them with the main force!"

Leave None Behind is a challenge scenario of Hyrule Warriors: Age of Calamity, unlocked by completing The Yiga Clan Attacks!. The selected character must rescue the allies by defeating all the mini-bosses in the bases.