From Zelda Dungeon Wiki
Jump to navigation Jump to search
Want an adless experience? Log in or Create an account.
Kakariko Bridge 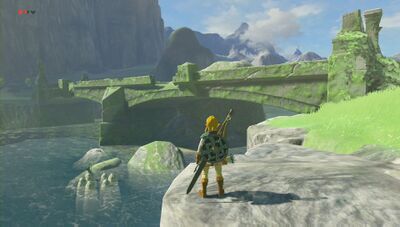 Kakariko Bridge is a location found in Breath of the Wild.

The Kakariko Bridge extends over Lake Siela in the West Necluda region. It is part of the pathway that connects the Dueling Peaks Stable with Kakariko Village. While the bridge is still serviceable to cross over the river, parts of it have broken. At some point in time a massive boulder flowed down the river, crashing into its side, causing significant damage. Large pieces of the side of the bridge, as well as small rocks can be found throughout. Additionally, some vines can be seen growing on the sides of the bridge, furthering the bridges decay.

The bridge is well traveled as both Brokka and Bugut will regularly walk across, traversing between the Dueling Peaks Stable and the Shuteye Inn within Kakariko Village. Later in the quest, after Link has completed the Seek Out Impa Main Quest, or after entering the Yiga Clan Hideout, a Traveler will appear just north of the bridge. After talking to this traveler, he will reveal himself to be a member of the Yiga Clan and will attack Link.

Beneath the bridge there is a small piece of land that has a lit Cooking Pot, along with a Pot Lid and a Torch. There are two metal crates here and if they are broken open, Link can find some some Arrows, Rupees, and some cooked food. There is a treasure chest just behind these creates and it contains some Ice Arrows. A second treasure chest can be found in the water just east of the bridge and it contains an Opal gem.

In Master Mode, there are some Sky Octoroks just east of the bridge that hold up a wooden platform. Up top, Link will find a treasure chest that contains a Boomerang. 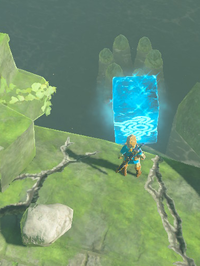 From the bridge above, put a Cryonis pillar just in front of the circle of rocks, then toss a rock onto the pillar so it bounces into the circle.

While there is a nearby rock under the bridge, this seed is much easier to get from the bridge above. Throw one rock towards the circle and note where it splashes. Put a Cryonis pillar in exactly that spot. Now throw a second rock, and it will bounce off the pillar into the circle. You can also stand on the pillar to the left.