From Zelda Dungeon Wiki
Jump to navigation Jump to search
Want an adless experience? Log in or Create an account.
Lantern Lake 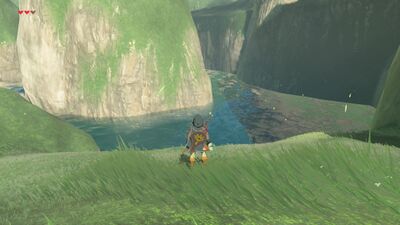 Lantern Lake is a location in Breath of the Wild.

Lantern Lake is located just west of Kakariko Village, right behind Impa's House. It is surrounded by many very steep mountains, which fit the geography of the adjacent Pillars of Levia to the south, and Bonooru's Stand to the east. The water in the lake flows down the waterfalls, surrounding Impa's House. There are numerous fish in this upper part of the lake, including Armored Carp, Mighty Carp, Hyrule Bass, and Staminoka Bass. Down by Impa's House, there are some more Hyrule Bass as well the more rare, Sanke Carp. Despite having no clear source of where the water is coming from, the water in Lantern Lake moves rapidly down the waterfall.

At the center of the Lake there is a really tall cliff with a treasure chest at its peak containing a Phrenic Bow. However, Link will need to use Magnesis to pull it out of the ground and it can easily tumble down the cliff. There is also a single Blue Nightshade and Silent Shroom at the top of this peak. A second treasure is located in the water, just west of Impa's House, containing an Eightfold Longblade.

Just south of the Lake, the Fang and Bone shop will appear at nighttime between 9pm and 5am. Kilton is the shopkeeper and he'll initially sell some Monster Extract, a Wooden Mop, and a Bokoblin Mask. After Link completes more of the Divine Beasts, the inventory at Kilton's shop will increase. Kilton deals in Mon, which can be earned by selling monster parts to Kilton.

At the peak of the mountain just west of the lake, there is an Eightfold Blade stuck inside a stone pedestal, just in front of a small statue.