This article is about the Recovered Memory. For the plant and material, see Silent Princess. 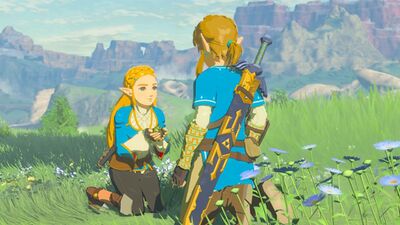 Silent Princess is one of the Recovered Memories found in Breath of the Wild.

After Link has completed the Locked Mementos by talking to Impa, this will begin the Captured Memories main quest. Silent Princess is one of the twelve pictures that are loaded in the Sheikah Slate.

"Zelda shows Link some of the rare types of wildlife in Hyrule. She explains her admiration for a flower called the silent princess. She also catches something unexpected and inspiring!"

The memory begins with Zelda and Link kneeling together on a grassy hillside beneath a tree, their horses grazing quietly nearby. Zelda cheerfully takes pictures of various surrounding flowers on the Sheikah Slate, telling Link about how the flowers in Hyrule are useful as ingredients in medicines and elixirs, aside from being beautiful. She pauses, and shows Link a beautiful blue flower: the Silent Princess. She tells him that this flower is endangered, and despite their best efforts nobody had been able to domesticate it yet. The species' only hope was that it could survive on its own, in the wild.

Zelda stops again and excitedly scoots past the Silent Princess flower, reaching out and grabbing something in her hands as she tells Link about the thing she spotted. Delighted that she managed to catch it, she tells Link that studies have shown that ingesting the creature she caught may bolster certain physical abilities. She opens her hands, revealing a Hot-Footed Frog, and tells Link that while they're not in a controlled environment, Link's physical fitness would make him a perfect subject to study the frog's effects. The memory ends with Zelda thrusting the frog towards a flustered Link, telling him to taste it.

Breath of the Wild Recovered Memories[edit][hide][show]
Retrieved from "https://www.zeldadungeon.net/wiki/index.php?title=Silent_Princess_(Memory)&oldid=449865"
Category: