From Zelda Dungeon Wiki
Jump to navigation Jump to search
Want an adless experience? Log in or Create an account.
Despair 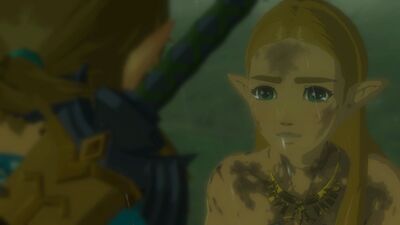 Despair is one of the Recovered Memories found in Breath of the Wild. After Link has completed the Locked Mementos by talking to Impa, this will begin the Captured Memories main quest. Despair is the chronologically last of the twelve pictures that are loaded in the Sheikah Slate.

"Four of the Champions, King Rhoam, and everyone inside the castle lose their lives when Ganon takes control of the Divine Beasts and the Guardians. Link suffers an unfortunate fate fighting Calamity Ganon alongside Zelda."

This memory starts with Zelda and Link desperately running through the grove where the memory is located, in the middle of a heavy downpour of rain. Link is holding the Master Sword, and he and Zelda are holding hands and covered in mud. Zelda's hand slips from Link's, and she stops, falling to her knees in despair. Link turns back and sheaths the Master Sword to kneel in front of her.

Zelda begins mourning the takeover of the Divine Beasts and the Guardians and the fate of the four Champions at the hands of Calamity Ganon. She starts crying and blames herself for this outcome, saying that this all happened because she was unable to harness her sealing power. She believes she failed the other Champions, and the entire kingdom. The memory ends with Zelda collapsing into Link's lap, sobbing.