From Zelda Dungeon Wiki
Jump to navigation Jump to search
Want an adless experience? Log in or Create an account.
A Premonition 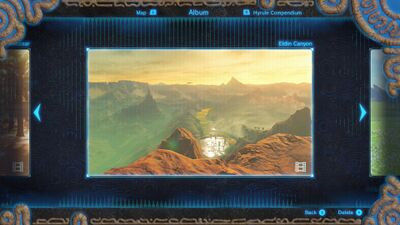 A Premonition is one of the Recovered Memories found in Breath of the Wild.

After Link has completed the Locked Mementos by talking to Impa, this will begin the Captured Memories main quest. A Premonition is one of the twelve pictures that are loaded in the Sheikah Slate.

Pikango in Goron City will recognize the location that is shown in the picture.

The actual location is found just northeast of the Woodland Stable and west of Goronbi Lake.

"Zelda explains to Link that in order to properly fulfill his role, he needs to exercise caution. She then expresses her unease about the growing numbers and types of monsters that have been seen recently in Hyrule."

The memory begins in the location where it is found. Zelda and Link are on the mountainside, surrounded by the corpses of several monsters, including more than one White-Maned Lynel. Zelda is tending to Link, who got injured in the unseen altercation, and tells him that though his injuries aren't bad, there's a difference between courage and recklessness and that he needs to be more careful. Zelda then expresses concern that not only are monster attacks happening more frequently than before, the scale of the monsters regularly appearing is increasing as well. She worries that this may be a sign of Calamity Ganon's impending return, and that if that is the case, they need to be prepared for the worst. The memory ends with Zelda and Link beginning to make their way back down the mountainside.

Breath of the Wild Recovered Memories[edit][hide][show]
Retrieved from "https://www.zeldadungeon.net/wiki/index.php?title=A_Premonition&oldid=377802"
Category: