Blades of the Yiga

From Zelda Dungeon Wiki
Jump to navigation Jump to search
Want an adless experience? Log in or Create an account.
Blades of the Yiga 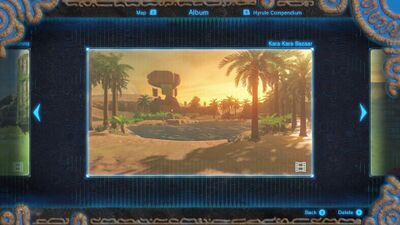 Blades of the Yiga is one of the Recovered Memories found in Breath of the Wild.

After Link has completed the Locked Mementos by talking to Impa, this will begin the Captured Memories main quest. Blades of the Yiga is one of the twelve pictures that are loaded in the Sheikah Slate.

Pikango at the Gerudo Canyon Stable will recognize the location that is shown in the picture as the Kara Kara Bazaar, an oasis just southwest of the stable. He describes the place as a great place that is brimming with an exotic atmosphere.[1] The actual location is found just northeast of the pond.

"Zelda is attacked by members of the Yiga Clan. She attempts to escape, but to no avail. At the last moment, Link appears and saves her."

This memory begins with Zelda, running in a panic through the Gerudo Desert near the Kara Kara Bazaar. She looks back and stumbles, and her advance is suddenly cut off by a pair of Yiga Footsoldiers. She turns to run back and another Yiga Clan member appears there, trapping her. She falls to the ground, fearfully resigned as one of the Yiga raises their Vicious Sickle, about to strike the killing blow. Suddenly, the Yiga is disarmed, and as the sickle flies into the air, Zelda looks up to see Link, dropping the one Yiga assassin and assuming a protective stance between Zelda and the other two. The two remaining Yiga back up, and the memory ends with Zelda looking up at Link from her position on the ground with an unreadable expression on her face.

Breath of the Wild Recovered Memories[edit][hide][show]
Retrieved from "https://www.zeldadungeon.net/wiki/index.php?title=Blades_of_the_Yiga&oldid=394340"
Category: