From Zelda Dungeon Wiki
Jump to navigation Jump to search
Want an adless experience? Log in or Create an account.
Zelda's Resentment 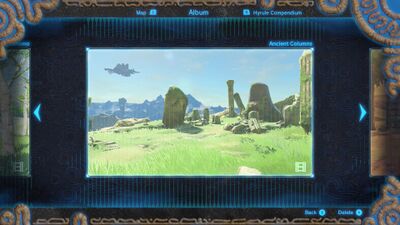 Zelda's Resentment is one of the Recovered Memories found in Breath of the Wild.

After Link has completed the Locked Mementos by talking to Impa, this will begin the Captured Memories main quest. Zelda's Resentment is one of the twelve pictures that are loaded in the Sheikah Slate.

Pikango at the Tabantha Bridge Stable will recognize the location that is shown in the picture as the Ancient Columns. He guides Link across the Tabantha Great Bridge, stating that the columns are found just south on a higher cliff, after crossing the bridge.[1] The memory is found right next to the Tena Ko'sah Shrine.

"Zelda continues her research on the shrines, but her repressed frustration builds as she is denied entry. When Link appears, Zelda loses control and is overcome by her anger."

The memory begins with Zelda, crouched on the dais of the Tena Ko'sah Shrine, examining the pedestal. The shrine is entirely unlit, and makes no reaction when Zelda taps the Sheikah Slate on the pedestal. Zelda observes that this was the expected outcome, and that the Shrines seem to have been developed to only be accessed by the chosen wielder of the Master Sword, but that she hopes she can work around this.

Link rides up on his horse at this time, hopping down and jogging up to a displeased looking Zelda. She snaps that she had told him she didn't need an escort, and that she was apparently the only one capable of thinking for herself. She tells Link to return to the castle and tell her father that she's fine. As she begins to storm off toward her own horse, Link moves to follow her. Seeing this, she turns and snaps at him to stop, which is where the memory ends.

Breath of the Wild Recovered Memories[edit][hide][show]
Retrieved from "https://www.zeldadungeon.net/wiki/index.php?title=Zelda%27s_Resentment&oldid=438257"
Category: