Era of the Great Sea 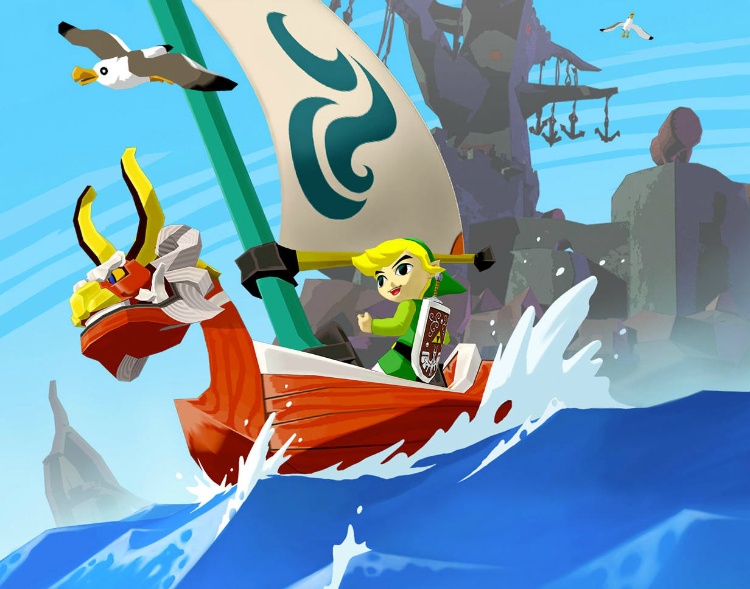 The Era of the Great Sea takes place many years after the events of the Era without a Hero. Due to there being no hero to stop the Demon King Ganon, Hyrule was flooded by the Goddesses in an event labeled the “Great Flood”. With all of Hyrule now flooded, the once thriving Kingdom became to be known as the Great Sea.

The seal on the Demon King, once again, begins to weaken and he breaks free from the depths of the ocean, after withstanding hundreds of years of insolation.[1] Ganondorf proceeds to attack the Wind and Earth temples, and kills their respective Sages.[2] He intended to do this in order to diminish the power of Ganondorf's one weakness, the Master Sword. The former Demon King set up his fortified base within the Forsaken Fortress.[3] He ordered the demonic bird, named the Helmaroc King, to search for Princess Zelda across the vast seas.[4] King Daphnes Nohansen Hyrule is ordered by the gods to reawaken from his sleep at the bottom of the sea, in order to put an end to Ganondorf's plans.[5] The former King disguised himself as a boat of sorts, named the King of Red Lions.[6] He begins to search for the new Hero, and Tetra, one of his descendants believed to be related to Princess Zelda.[7]

The Young Boy's Trial of Courage

A young boy, named Link, off Outset Island, got involved with the evil scheme of Ganondorf when his sister Aryll was kidnapped by the Helmaroc King. He teamed up with Tetra, and her crew of pirates, in an attempt to siege the Forsaken Fortress and save his sibling. The young boy soon encountered Ganondorf atop the Fortress but was snubbed and kicked out. Link found himself washed upon the shore of Windfall Island, where he met with the King of Red Lions.[8] He teamed up with the mysterious boat and sailed the Great Sea on a quest to find his sister.[9] Link obtains all three Goddess Pearls and uncovers the Tower of the Gods, where he undergoes the test of the Master Sword.[10] After passing the test, he ventures down to the sunken Hyrule and wields the famed Master Sword.[11]

The End of Ganondorf

Even though the hero had the legendary blade, it was severely underpowered to Ganondorf's previous actions.[12] Link ventures to the Earth and Wind Temple in order to awaken the power of the Sages, in the form of Medli and Makar. The two young Sages gave power to the Master Sword, returning the blade to its former glory.[13] The young hero sailed the Great Sea and found the separate fragments of the Triforce of Courage.[14] After doing so, he returned to the sunken Hyrule and encountered the Demon King Ganondorf within his Tower. After finally defeating him, peace was restored to the ocean. As old Hyrule faded, Link and Tetra returned to the surface while Daphnes decided to drown with the Kingdom he once ruled.[15][16] The pair combined with the rest of the pirate crew then set sail in a journey to find a new continent fitting to host new Hyrule.