From Zelda Dungeon Wiki
Jump to navigation Jump to search
Want an adless experience? Log in or Create an account.
Era of Decline 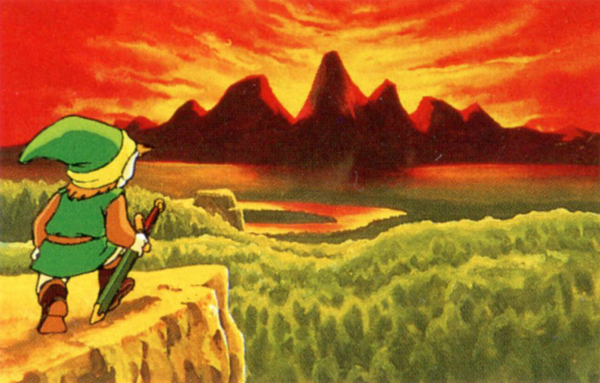 The Era of Decline, as the name suggests, is a period in which the Kingdom of Hyrule underwent a substantial amount of decline. This decline came after the prosperous Golden Era, however, due to a tragic series of events it eventually led to the downfall of the Kingdom. This Era follows the events prior and during both The Legend of Zelda and The Adventure of Link.

Tragedy of Princess Zelda I

Main article: The Tragedy of Princess Zelda I

After the defeat of the Demon King Ganon during A Link to the Past, the Triforce was passed down many generations through the Royal Family.[1] Due to the many great Kings, the Kingdom went through a Golden Era.[2] However, one King believed that after his death the Triforce would be misused.[3] To counter this, the King hid the Triforce of Courage and put a spell in which a crest would appear on the hand of a person worthy of wielding the full relic.[4]

The two heirs to the Kings throne were the Prince and Princess Zelda.[5] However the King was wary of his sons aptitude, due to this, the King only told Princess Zelda of the whereabouts to the Triforce of Courage.[6] Now the Prince wouldn't be able to wield the full Triforce once he ascended to the Throne. After the Great King's death, the Prince now became the new King of Hyrule and he soon realized that the Triforce he inherited was incomplete.[7] In anger, he searched frantically throughout the lands of Hyrule but to no success. Soon enough, a Wizard appeared and told the young King that the Princess knew the secret of the remaining piece of the Triforce.[8] Princess Zelda kept dearly to her word and,[9] in frustration, the powerful Wizard cast a spell in which the Princess entered an eternal slumber.[10] The young King soon regretted his hasty decisions and he took Zelda to the North Castle, where he laid her body to rest.[11] With Zelda now in an eternal sleep so was the secret about the Triforce of Courage, thus no King could utilize the full power of the Triforce for many years to come. Due to this, the once great Kingdom decreased in size and entered a period of decline.[12]

One day the great Demon King Ganon returned and attacked the now small Kingdom of Hyrule.[13] Ganon obtained the Triforce of Power and sought after the remaining pieces. The Princess Zelda of this time decides to split the Triforce of Wisdom into eight separate pieces and spread them throughout the barren wasteland that is Hyrule.[14] Princess Zelda ordered her nurse, Impa, to search the lands for a possible hero worthy of suppressing the Demon King.[15] Infuriated, Ganon captures the Princess and sends his minions to search for Impa.[16] Impa soon finds herself surrounded,[17] it is then that a young hero, by the name of Link, appears and saves her.[18] Impa informs the young hero about the quest ahead of him.[19] Link goes to the eight temples throughout the land and completes the Triforce of Wisdom.[20] Using this golden relic, Link is able to defeat the Demon King and rescue Princess Zelda.[21]

Unification of the Triforce

Main article: The Adventure of Link

Six years passed since the defeat of Ganon and Link, now sixteen, notices an odd crest on his hand.[22] He quickly seeks the assistance of Impa, who then takes the young hero to the North Castle.[23] Link presses his hand against the door and thus opens the chamber.[24] Inside he finds the sleeping Princess Zelda,[25] Impa informs Link that in order to awaken the Princess, he needs the Triforce of Courage.[26] Impa then sends Link out on a quest to remove the barriers to the Valley of Death. During these events, Ganon's minions attempt to resurrect their King by defeating Link. In order to aid the hero, Impa hands him six Crystals and a scroll bearing the mark of the Royal Family.[27] Link soon lifts the barrier and enters the Great Palace,[28] where hs is put to the test by a mysterious figure in the form of Dark Link. After defeating him,[29] Link is able to obtain the Triforce of Courage. He now returns to the North Castle and lifts the spell set on Zelda.[30] With the Princess now back to her normal self and with the plans to resurrect Ganon foiled, peace returns to the Kingdom of Hyrule.[31]