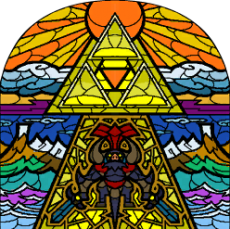 The Great Flood occurs hundreds of years[1] after the Adult Ending of Ocarina of Time, after Ganon returns but no hero appears to oppose him. In desperation, the people of Hyrule pray for deliverance. The Golden Goddesses respond by sealing Ganon along with all of Hyrule beneath the newly created Great Sea.

Ganon returns from the Sacred Realm after being sealed by the Hero of Time in Ocarina of Time.[2][3] With the departure of the hero, the strength of the Seven Sages weakened, allowing Ganon to return.

Due to Ganondorf's uprising, the people of Hyrule desperately prayed that the Hero of Time would return and save the Kingdom, but he was nowhere to be seen,[4] due to the Hero of Time having returned to his own time and not returning.[5] Left hopeless, the current King of Hyrule, Daphnes Nohansen Hyrule, left the fate of the Kingdom to the gods.[6][7] Ganondorf's armies infiltrated Hyrule Castle, but Ganondorf fled the scene, literally abandoning his army. The Goddesses, in turn, ordered an evacuation to the mountaintops.[8] Some, including Daphnes Nohansen Hyrule, however, refuse.[9] Hyrule Castle is buried beneath the waves and drained of its color. Civilizations later developed on the islands, which were the mountaintops from before. New technologies developed, giving the new people that arose on these mountaintops a new way of life. The Great Flood changed the series drastically through the evolutionary processes of many species and destroying the cultures, technologies, and ideologies that developed within Hyrule before the flood itself. Mostly no one remembers the events that took place in the Era of the Great Sea, considering the Flood occurred hundreds of years ago and there are no vital sources of information to prove such an event. Ganondorf later rose back in full force, settling on the Forsaken Fortress and creating a massive army that would terrorize the waters of the Great Sea for many, many years until the appearance of the Hero.

Many theories are posed regarding the tribes of Ocarina of Time and their current situation in The Wind Waker. The Zora are missing. Some argue that they should have survived, considering they are excellent swimmers and thrive well in aquatic environments. But because the Zora's Domain had fresh water, the salt water in the Great Sea made them unable to live, later dying. Although this is the disputed theory, the most widely accepted theory among all the proposed theories is that they evolved into the Rito, a tribe that excels in flying and delivering goods, rather than swimming. The Gorons managed to survive, yet very few remain. The Kokiri developed into the Korok, from humanoid forms to wooden forms. Very little things remained from the Flood, but some things that did remain include the Great Deku Tree and Ganondorf.