Zelda (The Adventure of Link)

From Zelda Dungeon Wiki
Jump to navigation Jump to search
Want an adless experience? Log in or Create an account.
Princess Zelda I 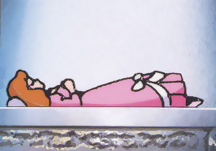 Art from The Adventure of Link

Princess Zelda, also known as Princess Zelda I to distinguish her from her descendent who appeared in the previous game, is a character from The Adventure of Link.

Many, many years before the events of The Legend of Zelda, Hyrule was a prosperous kingdom, of which a girl named Zelda was the daughter of the King. Although not destined to inherit the throne, she was trusted more than her brother, the Prince and heir apparent to the throne. Thus, the King told her a great secret - when he died, he would not grant the kingdom's greatest treasure, the Triforce, to her brother in full. Instead, while the Triforce of Power and Triforce of Wisdom would be left to the new king, he would hide the Triforce of Courage in the Great Palace in the Valley of Death, sealed by crystalline locks in six other palaces.

When the king finally died, his son searched frantically for the Triforce of Courage, but could find no clue until a magician told him that Princess Zelda knew. Zelda refused to tell her brother anything, and the magician took over the interrogation, threatening to put her "into an eternal sleep" if she did not tell. When she refused and the magician began to carry out his threat, her brother attempted to stop him, but failed - however, not only did Zelda fall into suspended animation, but the effort killed the magician, leaving no way to undo his work.

Regretful, her brother had her placed in a room in the North Castle, and sealed it in a room that only the royal family's retainers had access to. He also ordered that, in future, "every female child born into the royal household should be given the name Zelda" so that she would not be forgotten.

After many years passed, and the area ruled by the royal family shrivelled into Lesser Hyrule, a boy named Link approached his 16th birthday. Having already done heroic deeds on behalf of the kingdom, he was surprised when a strange mark resembling part of the Royal Crest appeared on his hand.

Impa, the current descendant of the retainers and nursemaid to the current Princess Zelda, was shocked and took him to see the long-sleeping woman in the North Castle, explaining her story, and giving him a scroll which only those who bore the mark could read - a backup plan from the long-dead king, which explained that only a "young man with that character who has been brought up correctly, has gained many kinds of experiences and reached a certain age" would have the crest and could read the scroll. It explained why he had not passed the Triforce of Courage to his son, the resting place and conditions to recover it, and the spell which he had cast to trigger the crest's appearance.

Impa begged Link to take a set of crystals to open the locks in the Palaces across what had once been the Kingdom of Hyrule, reunite the Triforce and use it to restore the elder Princess Zelda. Travelling across the land, he ultimately succeeded. On waking, amazed, Zelda called him a "a real hero" and she learned for a kiss.

What happened afterward, including her relationship with her similarly-named descendant, is unknown.