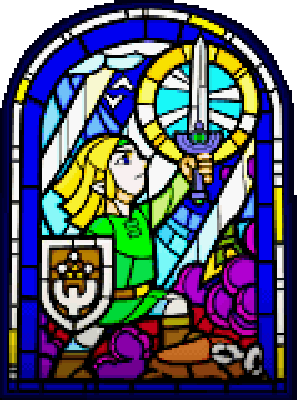 The Hero of Men is mentioned in The Minish Cap. In this particular installment, he is part of a tale told during the beginning of the game. He is said to be a great hero and was gifted with the Picori Blade and the Light Force by the Picori.

During the prologue of The Minish Cap, the tale of the Hero of Men is told.

"A long, long time ago... when the world was on the verge of being swallowed by shadow... The tiny Picori appeared from the sky, bringing the hero of men a sword and a golden light. With wisdom and courage, the hero drove out the darkness. When peace had been restored, the people enshrined that blade with care."

According to Hyrule Historia, the world was engulfed in evil beings and shrouded in darkness, but a tiny Picori offered a golden light and a sword.[1] The Hero of Men then used the sword (Picori Blade) and the golden light (Light Force) to seal the monsters inside of the Bound Chest.[2]

The Hero of Men isn't spoken of again in The Minish Cap and nor he is he mentioned again in any title of The Legend of Zelda series. It is still unknown whether the Hero of Men is indeed Link, though many have speculated due to the similar appearance and the fact that he took on the role of a hero.