From Zelda Dungeon Wiki
Jump to navigation Jump to search
Want an adless experience? Log in or Create an account.
The Sacred Sword 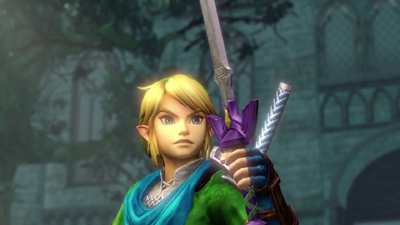 The Sacred Sword is the first scenario in the Epilogue set of the Hyrule Warriors Legend Mode. Completing it unlocks the Master Sword weapon for Link.

"With the Gate of Souls closed in each era, Link and his allies were reunited.
Sheik was at last revealed as Zelda, relieving much worry about her fate.

Meanwhile, Ganondorf had recovered three of his four spirit fragments.
He chose to leave Cia's body, her usefulness at an end.
Free of Ganondorf's control but tragically corrupted, Cia resolved to make Link and the Triforce hers and hers alone.
Using powerful rituals to strengthen her forces, she redoubled her attacks on Hyrule

But all was not lost...
Zelda directed her forces to the Temple of the Sacred Sword in search of the one thing that could save them all..."