The Sorceress of the Woods

From Zelda Dungeon Wiki
Jump to navigation Jump to search
Want an adless experience? Log in or Create an account.
The Sorceress of the Woods 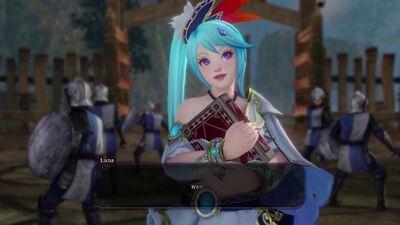 The Sorceress of the Woods is the third scenario in Legend Mode of Hyrule Warriors, taking place in Faron Woods. The Bow can be found in this scenario.

Having been helped through the Caves by the mysterious Sheik; Link and Impa find the woman leading the resistance in Faron Woods is not Zelda, but a young sorceress named Lana. Disappointed, they nonetheless join her in defending the woods against the Bulblin forces lead by Wizzro.

Completing it unlocks Lana (with Book of Sorcery) as a playable character in the Wii U version & Hyrule Warriors Legends; plus Linkle (with Crossbows) in Legends only.

"Link and his allies were saved from the dangers of the Eldin Caves by a mysterious youth named Sheik.
Joined by their new ally, Impa's troops exited the caves and emerged in Faron Woods.
There they found a hidden village overrun with monsters.
While Link and Impa wanted to continue their search for Zelda, they could not ignore the plight of the villagers. Without hesitation, they sprang into battle."

— The Sorceress of the Woods loading screen narrative, Hyrule Warriors (Wii U)