From Zelda Dungeon Wiki
Jump to navigation Jump to search
Want an adless experience? Log in or Create an account.
Land of Myth 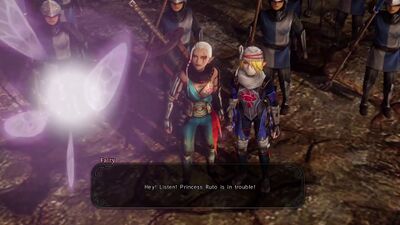 Land of Myth is the first scenario in the Ocarina of Time set of the Hyrule Warriors Legend Mode. In the base game, it was one of the three branching scenarios available after completing The Sorceress of the Valley.

"Leading a small force of Hyrulean soldiers, Impa stepped into one of the newly opened portals.
The kingdom spread out before her seemed like the Hyrule she knew, yet it was somehow very different.
Before long, she realized that they had traveled back to the era of the mythical Hero of Time.
Awed, Impa began her search for the Gate of Souls.
She sensed an evil presence on Death Mountain and set out for the ominous peak.
And with her came the mysterious Sheik..."