March of the Demon King

From Zelda Dungeon Wiki
Jump to navigation Jump to search
Want an adless experience? Log in or Create an account.
March of the Demon King 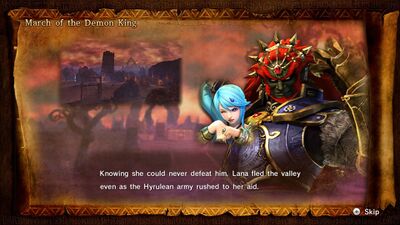 March of the Demon King is the second scenario in the Ganondorf set of the Hyrule Warriors Legend Mode.

"With terrifying speed, the reborn Ganondorf raised his army and fortified his position in Gerudo Desert.
More powerful than ever, he moved to take the scattered pieces of the Triforce.

His first target was the Triforce of Power, still in Lana's possession.
Ganondorf had wielded it long ago and claimed it as his right.
Regaining it would give him the might to seize the other two pieces.
With this thought, Ganondorf led a massive army to the Valley of Seers.

Knowing she could never defeat him, Lana fled the valley even as the Hyrulean army rushed to her aid.
But Ganondorf outmaneuvered her and cut off her retreat, attacking fiercely to retake the Triforce of Power."