Battle of the Triforce

From Zelda Dungeon Wiki
Jump to navigation Jump to search
Want an adless experience? Log in or Create an account.
Battle of the Triforce 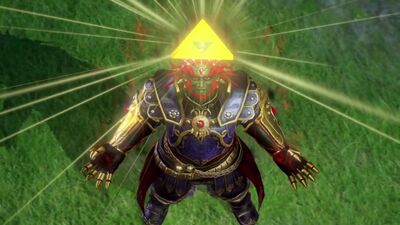 Battle of the Triforce is the third scenario in the Ganondorf set of the Hyrule Warriors Legend Mode.

"Ganondorf's forces defeated the Hyrulean army and wrenched the Triforce of Power from Lana's grasp.
Yet, the other two pieces remained with Link and Zelda in Hyrule Castle.
If Ganondorf could take the castle and complete the Triforce, Hyrule would be at his mercy.
He readied his army for a siege.

Meanwhile, Zelda's forces stood ready to defend their home at all costs.
Link stood at the head of the army, the shining Triforce of Courage inspiring his troops.
This battle would decide Hyrule's fate.
Would the light endure...or would darkness spread to every corner of the land?
The next moments would decide."