From Zelda Dungeon Wiki
Jump to navigation Jump to search
Want an adless experience? Log in or Create an account.
Darkness Falls 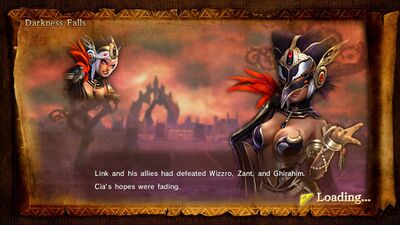 Darkness Falls is the fifth and final scenario in Cia's Tale, part of Legend Mode in Hyrule Warriors.

"Link and his allies had defeated Wizzro, Zant and Ghirahim. Cia's hopes were fading.
Meanwhile, Ganondorf was making his way to the Valley of Seers to wrest the Triforce of Power from her hands.

Cia had few options remaining.
Desperate to win at any cost, she tapped into her very life force to bolster her magic.
Cia knew this would cost her her life, but victory was now worth any price."