The Armies of Ruin

From Zelda Dungeon Wiki
Jump to navigation Jump to search
Want an adless experience? Log in or Create an account.
The Armies of Ruin 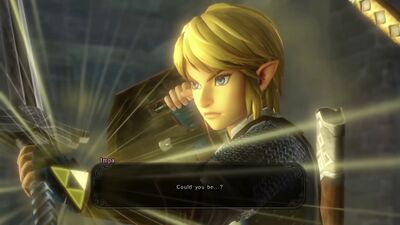 The Armies of Ruin is the first scenario in Legend Mode of Hyrule Warriors. Link is still an unknown trainee when the scenario begins, but gains recognition from Zelda and Impa alike as he displays his skill throughout the battle.

Partway through the scenario, the player discovers a treasure chest containing Bombs, which can then be used to destroy boulders as well as to harm enemies. Subsequent playthroughs still require the player to open the chest, but this time they contain a Weapon Pouch, as the player already has Bombs. This scenario's boss is King Dodongo, whose weakness gauge appears after ingesting Bombs.

Completing it unlocks Impa (with Giant Blade) as a playable character in all versions. In Hyrule Warriors: Definitive Edition, completing it also unlocks another fourteen characters with their starting weapons, and Breath of the Wild-inspired costumes for Link and Zelda.

"Hordes of monsters began laying siege to the Kingdom of Hyrule. Princess Zelda led a valiant defence against hopeless odds.
News of the Hyrulean army's imminent defeat reached the cadets at the knights' training yard.
As the elite troops fell in battle, Hyrule's trainees were left to wait helplessly inside the castle walls.
Despite the odds, one young knight took up his simple training sword and chose to fight. This brave young man was named Link.
Compelled to act, he rushed to the monster-ridden battlefield to assist Zelda and defend Hyrule."