From Zelda Dungeon Wiki
Jump to navigation Jump to search
Want an adless experience? Log in or Create an account.
Hylian Sword 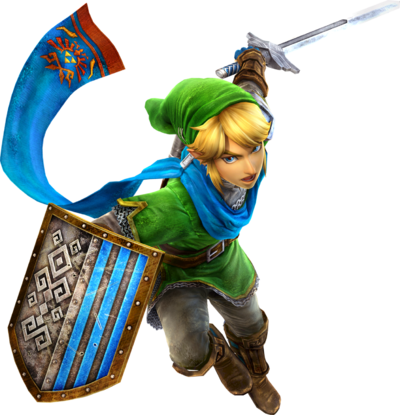 The Hylian Sword is one of Link's weapons in Hyrule Warriors. Link starts with a Knight's Sword at the beginning of the game. The sword is like the later-achieved Master Sword, but it is less powerful. The spin attack (activated by holding and the strong attack button and then releasing it) is also weaker. One of the most-notable differences, though, is the shield. The shield has blue stripes on one side and a sort of spiral design. The second tier is the White Sword, earned after unlocking Fi, designed after the White Sword from The Legend of Zelda.

"A sword-and-shield combo modified for use by left-handed warriors. Charge energy by holding down the Strong Attack button, and then release for a powerful Spin Attack!"

Level 1. Automatically unlocked, present when you first play as Link.

Level 2. Unlocked in Legend Mode from a Sealed Weapon found by capturing the East Cannon Keep in Sealed Grounds.

Wii U: Unlocked in Adventure Mode by completing the challenge at grid F2? with an "A" rank as Link after using a Power Bracelet on the tombstone in the middle row, second from right.

3DS and Switch: Unlocked on the Master Quest Map H-6

Level 4+. Unlocked on Lorule Map A-11. This sword is available only in Legends and Definitive Edition. It adds the Darkness element to the weapon in addition to Light.

Wii U: Level 3. Unlocked in Legend Mode after completing Shining Beacon scenario in Valley of Seers. It was added to the game as part of a free update (v1.2.0). It has the same stats as the Magical Sword.

3DS and Switch: Level 4+. Can be used in place of the Darkmagic Sword or Magical Sword + when the 8-Bit Weapons option is turned on in the settings.