The Dragon of the Caves

From Zelda Dungeon Wiki
Jump to navigation Jump to search
Want an adless experience? Log in or Create an account.
The Dragon of the Caves 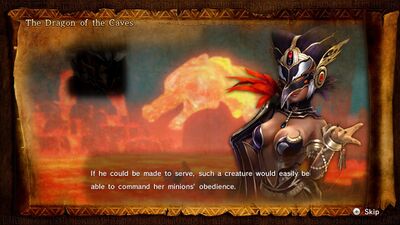 The Dragon of the Caves is the first scenario in Cia's Tale, and the chronologically earliest scenario overall of Legend Mode in Hyrule Warriors.

"The goodness driven from her heart, Cia opened the Gate of Souls, summoning vast hordes of monsters to Hyrule.
Ganondorf's spirit counseled that her attack must be swift and devastating if she was to be victorious.
However, controlling an army would require a commander, and Cia realised she would need a powerful warrior to serve as her general.
The perfect commander came readily to mind: the Dragon Knight of the Eldin Caves.
If he could be made to serve, such a creature would easily be able to command her minions' obedience.

Cia wasted no time.
She immediately set off for the Eldin Caves in search of her new champion."

— The Dragon of the Caves loading screen narrative, Hyrule Warriors (Wii U)