From Zelda Dungeon Wiki
Jump to navigation Jump to search
Want an adless experience? Log in or Create an account.
The Invasion Begins 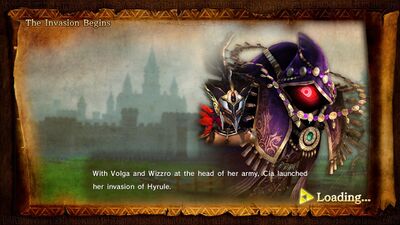 The Invasion Begins is the second scenario in Cia's Tale, part of Legend Mode in Hyrule Warriors.

"With Volga and Wizzro at the head of her army, Cia launched her invasion of Hyrule.

En route, Wizzro offered some advice.
He said their first priority should be the eradication of Hyrule's fairies.
The good-hearted fairies of Hyrule were known to provide aid and comfort to their chosen warriors.
Should the legendary hero appear and receive their assistance, Cia and her forces might be hard pressed.

Cia considered Wizzro's counsel, and commanded her troops to begin hunting fairies.
Many fairies were captured throughout Hyrule, but a few eluded her grasp.
Unbeknownst to Cia, a mysterious young woman was working with the Gorons to protect the fairies.

Rather than delay her invasion further, Cia dispatched Volga and Wizzro to capture the last stragglers."