The Sorceress of the Valley

From Zelda Dungeon Wiki
Jump to navigation Jump to search
Want an adless experience? Log in or Create an account.
The Sorceress of the Valley 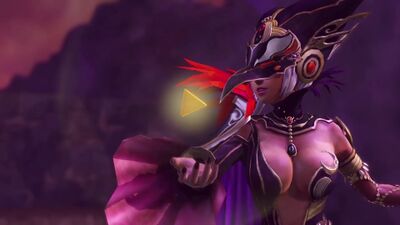 The Sorceress of the Valley is the fourth scenario in Legend Mode of Hyrule Warriors, taking place in the Valley of Seers. The Boomerang can be found in this scenario.

Now joined by Lana - who admits to a kinship with Cia, the sorceress behind the conquest of Hyrule - the Hyrulean troops led by Impa, Link and Sheik head to the Valley of Seers, aiming to close the Gate of Souls and stem Cia's reinforcements.

"The leader of the resistance in Faron Woods was a young sorceress named Lana.
She was of the same clan as Cia, who had summoned the monsters to Hyrule.
Lana had been fighting Cia's army since it arrived.
Cia now sought to complete the Triforce and use it to conquer Hyrule.
Link and Impa decided to join forces with Lana to prevent further tragedy.

Although the monsters of Faron Woods had been defeated, Cia still controlled most of Hyrule.
Every day more creatures appeared and swarmed the land.
Link and Impa fought on against the darkness, sorely missing Zelda's leadership.
Only one solution remained--stem the tide of monsters by closing the Gate of Souls.
The heroes headed to the Valley of Seers to put an end to the bloodshed."

— The Sorceress of the Valley loading screen narrative, Hyrule Warriors (Wii U)