From Zelda Dungeon Wiki
Jump to navigation Jump to search
Want an adless experience? Log in or Create an account.
The Sheikah Tribesman 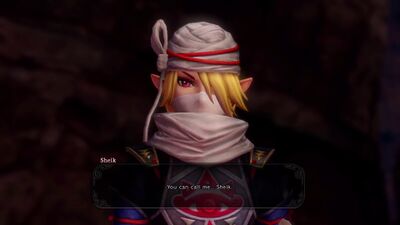 The Sheikah Tribesman is the second scenario in Legend Mode of Hyrule Warriors, taking place in Eldin Caves.

Link and Impa travel through the caves on their way to Faron Woods, in the hope of finding Zelda there. In the caves, they meet Sheik who joins their party. At certain points, they have to use Bombchus to destroy large rocks blocking the path.

Completing it unlocks Sheik as a playable character in the Wii U version and Hyrule Warriors Legends.

"After an arduous battle, Link and his comrades slew King Dodongo, but the beast was only ever intended as a distraction.
The army of monsters had taken Hyrule Castle.
Worse, after the dust had settled Princess Zelda was nowhere to be found.
Impa and Link searched the battlefield for any sign of her, but to no avail.

Although the battle had been lost, Impa forsaw Link's importance to the coming war.
She bestowed upon him a green tunic--the sign of the legendary hero. Link did not believe himself worthy of the honor, but he was determined to help Impa and her remaining soldiers locate Zelda.

Impa heard a rumor that a handful of soldiers were holding out against the monsters in Faron Woods.
The leader of this resistance was supposedly a young woman.
Impa dared to hope that this unknown woman was Zelda.
Link and Impa decided to make their way to the forest by way of the Eldin Caves, a path with its own dangers."