From Zelda Dungeon Wiki
Jump to navigation Jump to search
Want an adless experience? Log in or Create an account.
Shining Beacon 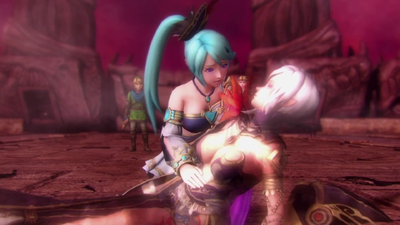 Shining Beacon is the final scenario in the Epilogue set of the Hyrule Warriors Legend Mode.

Completing it unlocks Ganondorf as a playable character in the Wii U version & Hyrule Warriors Legends.

"Link's brashness nearly cost him his life as shadowy doubles overwhelmed him. At the last moment, Link's allies salvaged a rescue from otherwise certain defeat. The Master Sword is a mighty weapon... but its true power can be used only by someone who understands the bonds of friendship.

The Hyrulean army was rallying its strength, but Cia's forces still controlled much of their homeland The only way to save Hyrule was to defeat Cia. The Hyrulean Army headed to the Valley of Seers to force a decisive battle

But Cia did not sit idle, despite her overwhelming advantage. She found new ways to fortify her troops using her own life force. The cost to herself was irrelvant, so long as she crushed her enemies. The final battle between the armies of light and darkness was about to unfold."