From Zelda Dungeon Wiki
Jump to navigation Jump to search
Want an adless experience? Log in or Create an account.
TODO: Languages
Care to do so?
Spear 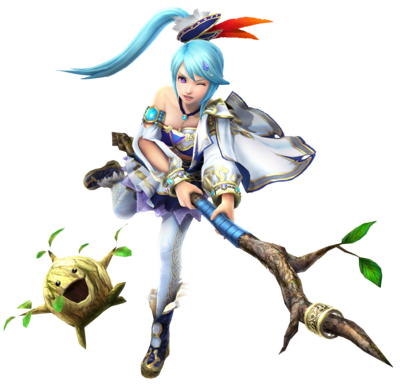 The Spear is one of Lana's weapons in Hyrule Warriors. It is unlocked in Legend Mode by collecting the Sealed Weapon from the treasure chest that appears after capturing the West Ruins in The Sorceress of the Valley. The weapon uses forest-based attacks that are mainly focused on elements from Kokiri Forest and the Forest Haven. The strong attack button causes either a tree or Deku Tree Sprout to sprout from the ground. The combo chains include a Fairy Slingshot that shoots Deku Nuts, the Deku Leaf that lets Lana fly or make bursts of wind, and various nature-inspired attacks. During the weapon's Special Attack, the Great Deku Tree springs from the ground and Lana leaps onto one of his branches. Lana also uses the Deku Shield when blocking with this weapon.

"A branch from the Great Deku Tree, imbued with its power. Use the Strong Attack button to plant Deku Tree saplings, which will quickly sprout and knock back enemies."

Unlocked in Adventure Mode by completing the challenge on grid C7? with an "A" rank as Lana, after using the Candle on the suspicious square.

Unlocked in Adventure Mode by completing the challenge on grid A12? with an "A" rank as Lana with the Spear, after using a Bomb on the wall, two spaces left of the northern passage.

Unlocked on the Grand Travels map in Adventure Mode by completing the challenge on grid F11? with an "A" rank after using the Cannon on the boulder.