From Zelda Dungeon Wiki
Jump to navigation Jump to search
Want an adless experience? Log in or Create an account.
The Usurper King 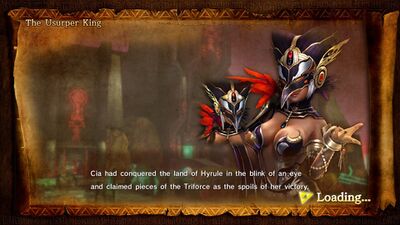 The Usurper King is the third scenario in Cia's Tale, part of Legend Mode in Hyrule Warriors.

"Cia had conquered the land of Hyrule in the blink of an eye and claimed pieces of the Triforce as the spoils of her victory.
Intoxicated by the power of the complete Triforce, she fell further under Ganondorf's sway.
At his urging, she ripped time and space open to create portals to three other era of Hyrule's storied past.

Immediately, she sensed a power emanating from the Era of Twilight. She set off to discover whether it was a resource to control...or an enemy to destroy."