From Zelda Dungeon Wiki
Jump to navigation Jump to search
Want an adless experience? Log in or Create an account.
Sealed Ambition 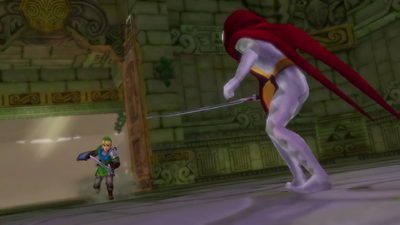 Sealed Ambition is the second and final scenario in the Skyward Sword set of the Hyrule Warriors Legend Mode.

"Fi, a servant of the goddess Hylia, joined Link and together they drove away the Dragon Knight Volga.
But despite the victory, Ghirahim managed to slip away in the chaos.
Hoping to destroy Ghirahim and close the Gate of Souls, Link followed Fi's advice and hurried to the Sealed Grounds.
The Hyrulean army advanced quickly in order to catch up to their quarry.
And that was when Ghirahim sprang his trap."