From Zelda Dungeon Wiki
Jump to navigation Jump to search
Want an adless experience? Log in or Create an account.
The Shadow King 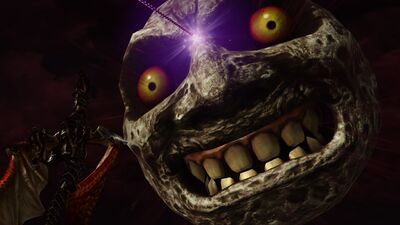 The Shadow King is the second scenario in the Twilight Princess set of the Hyrule Warriors Legend Mode. The Hookshot can be found in this scenario.

The stage's Giant Boss, Argorok, appears early on but is initially unreachable, engaging in fireball barrages of the Allied Base from the safety of the sky. The player must first use Magic Circles in the West Square & Central Square and, when those fail, seek the aid of the Great Fairy to pull Argorok out of the sky. Once on ground level, its weakness can be exposed by using the Hookshot on its tail.

"Lana had saved an unusual girl named Agitha from the Twilight.
To thank Lana for her rescue, Agitha gave her a Goddess Butterfly, an insect that could guide her wherever she wished to go.
A curious Twili named Midna also joined the party for reasons of her own.

The heroes followed the Goddess Butterfly, eventually arriving at the Palace of Twilight.
There they met a terrible foe.
It was Zant, the Usurper King of the Twilight Realm.
Lana and Midna would have to overcome his unnatural powers to complete their task."