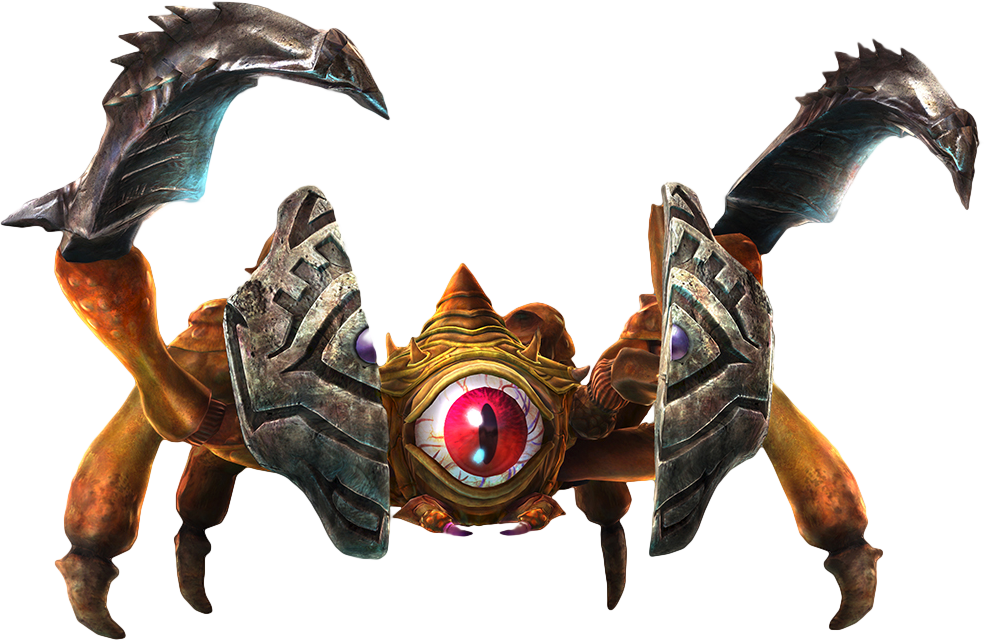 Gohma is one of six giant bosses found in Hyrule Warriors. Like its previous incarnations, Gohma is an evil beast with a giant eye and many legs.[1] Along with its many legs, it boasts powerful claws. While being very large and armored, Gohma is surprisingly quick and nimble because of its strong legs.[2]

Within Legend Mode, it is first fought as the boss of Faron Woods in "The Sorceress of the Woods" scenario. Once the Hyrulean Forces reach the Enemy Base, Wizzro leaves the battlefield and summons Gohma to kill them.[3][4] If it is not defeated some time after being summoned, Gohma is able to leap from the Enemy Base to the Great Deku Tree, beginning a massive strike on the Deku Tree.[5] As a result, the Hyrulean Forces suffer from a loss of moral and forces the player to travel to Gohma before the Allied Base falls. However, if Gohma is badly damaged afterwards, it temporarily withdraws from the Deku Tree by leaping into another keep, which allows for the Deku Tree to heal for a couple moments. Once Gohma is defeated, the Hyrulean Forces win the battle.[6]

It later appears as a commander of the Monster Forces along with Manhandla and King Dodongo in the "Ganondorf's Return" scenario of Gerudo Desert. Once Ganondorf defeats the Aeralfos at the Sacred Grounds, Manhandla and Gohma reveal themselves and try to rendezvous.[7] After Ganondorf defeats Gohma and the other giant bosses, his forces win the battle, fortifying his position at Gerudo Desert.

In the Master Quest DLC Pack, two Gohmas are led by Ganondorf, wanting to gain the Triforce of Power from Cia, in the "Darkness Falls" scenario of the Valley of Seers. At the beginning of the stage, he commands them to capture the East and West Keeps by the ruins for him,[8] forcing Cia and Volga to defeat the Gohmas and defend the keeps.[9] If the Dark Forces do not stop the Gohmas from taking the keeps, their moral falls, and the keeps must be retaken from Ganondorf's Forces.

Gohma usually attacks with its deadly claws. When Gohma lifts its left claw, it swipes with just the same claw, and Gohma will do a spinning tornado attack when it raises its right claw. Balls of acid are another attack it is able to perform, and it can emit a laser with its powerful eye from a distance.[10] If Gohma looks to the right, it will do a horizontal laser in an arc,[11] and if it looks down, Gohma is about to do a vertical laser that starts on the ground and move straight up.[12] As a result of its nimbleness, it is also able to leap high into the air and stomp back down on unsuspecting warriors.[2][13] When it leaps into the air, a large, white circle is left behind, indicating where Gohma is going to land when it returns.[14] Gohma can charge into its enemies, and it can use its forelegs by shoving them into the ground before removing them.

Similar to Oracle of Seasons, it is able to close the armor on its forelegs into a shield when attacked, preventing any damage to its eye.[15] When Gohma has shot a laser, it becomes immobile before attacking again, its eye becoming blue.[16] While its laser attacks make it immobile, its eye can become defenseless also when Gohma shoves its forelegs into the ground and becomes stuck. During this time, an arrow from the Bow can be fired at the unprotected eye and temporarily stun it, exposing its Weak Point gauge.[17][18] Like other bosses, a Focus Spirit Attack can automatically expose its gauge.[19] If the forces do not completely reduce the gauge before Gohma becomes mobile, it counterattacks by spinning around on its back before resuming its attacks. After completely reducing the Weak Point gauge, they can perform a Weak Point Smash that greatly damages Gohma. Once one Weak Point Smash is dealt to Gohma, it gains a new attack by building up a ball of energy before firing this giant, electrifying ball at the ground.[20] When it is charging it, Gohma leaves its eye defenseless, allowing for another way to expose its Weak Point gauge. Once Gohma is defeated, it can either drop acid or a lens, its silver and gold materials respectively.