From Zelda Dungeon Wiki
Jump to navigation Jump to search
Want an adless experience? Log in or Create an account.
Ganon 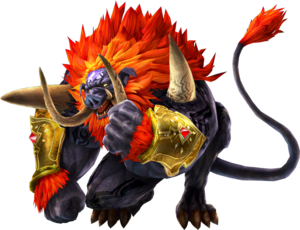 Ganon is the final boss in Hyrule Warriors. This behemothic beast is a mixture of Ganon from Twilight Princess and Ganon from Ocarina of Time.

Ganon first appears in the Liberation of the Triforce scenario of Legend Mode. After Ganondorf is defeated by Link, he transforms into his beast form and begins to attack. This pig-like monster is immense, but there is a strategy to defeating him. It takes all four of Link's items to get the job done: Bombs, Bow, Boomerang, and Hookshot. For the Bombs, Ganon lifts up his hand and charges a fireball. Link only has a tiny amount of time to toss bombs. Link must be in range for this attack to function properly at the hand. After Link does so, Ganon attacks with another one of his attacks, unable to throw another fireball again. For the Bow, Ganon lifts up his forearm, which has a beam-shooting eye inside it, and shoots a beam at Link. Link must shoot the eye to clear that stage. Next comes the Boomerang. Ganon has two stalks on his shoulders, which shoot seeds at Link. They will be exposed for a moment after firing, so after shielding to block the seeds, Link must throw the Boomerang. The last Item Stage is the Hookshot part. Ganon lifts into the air and starts to fly. He breathes fire at Link, but when he is done, Link has a moment to hook on to his tail with the Hookshot.

Once Link has gotten past all the Item Stages, Zelda grants Link with the Bow of Light. Ganon proceeds to leap at Link repeatedly. The procedure is to dodge, then shoot his glowing forehead with a Light Arrow. This opens his Weakpoint Gauge, which Link can then strike at with his sword. Once Link has repeated this process enough times, Ganon is defeated. In the cutscene that follows, Ganon roars wrathfully before Link, Lana, and Zelda fragmentize the Triforce pieces from Ganon. They then obliterate Ganon with the Triforce.

Ganon appears a several throughout Adventure Mode scenarios, primarily in the "final battle" scenario of a map. Winning one of these triggers the credits.