From Zelda Dungeon Wiki
Jump to navigation Jump to search
Want an adless experience? Log in or Create an account.
Sera 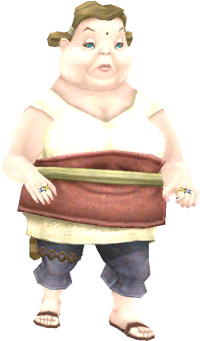 Sera is a character who makes an appearance in Twilight Princess. Sera is the co-owner of her shop, Sera's Sundries, which is the only shop in the Ordona Province. She owns it alongside her husband and her daughter. Sera is a rather large woman, however has more pride and respect than one could imagine. This is shown when after giving Link a Bottle with Milk; she says that after using the milk, Link can reuse the bottle and not just throw it away.[1]

In her shop there are six photographs. Four are of her cat, and the final two are of Beth.

Link first encounters Sera when he is looking to buy the Slingshot. However he is not be able to purchase it just yet, as Sera is distressed about losing her cat. She explained to Link that she previously scolded the cat, thus why it ran away. Link finds the cat hanging out by the small pond of water to the back of Jaggle's House. After Link has caught a fish using the Fishing Rod, the cat quickly runs back to the shop, the cat and Sera are now reunited. As a thanks for returning her cat, Sera rewards the young hero with a free Bottle filled with Milk, Sera now returns to selling item's in the shop, this enables Link to now obtain the Slingshot.