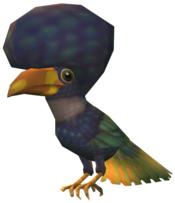 Trill is a character that appears in Twilight Princess. Trill is the bird that runs the shop in north Faron Woods outside the Forest Temple. He sells Link Lantern Oil and Red Potion. Link can choose whether or not to pay for the items by putting money in a box. If Link doesn't put money in, Trill calls him a thief, and returning to the shop area results in Trill attacking Link repeatedly until Link pays for the item he previously took. If Link gives him fewer Rupees than the advertised price of the item he takes, Trill calls Link a cheap skate.