From Zelda Dungeon Wiki
Jump to navigation Jump to search
Want an adless experience? Log in or Create an account.
Female Monkey 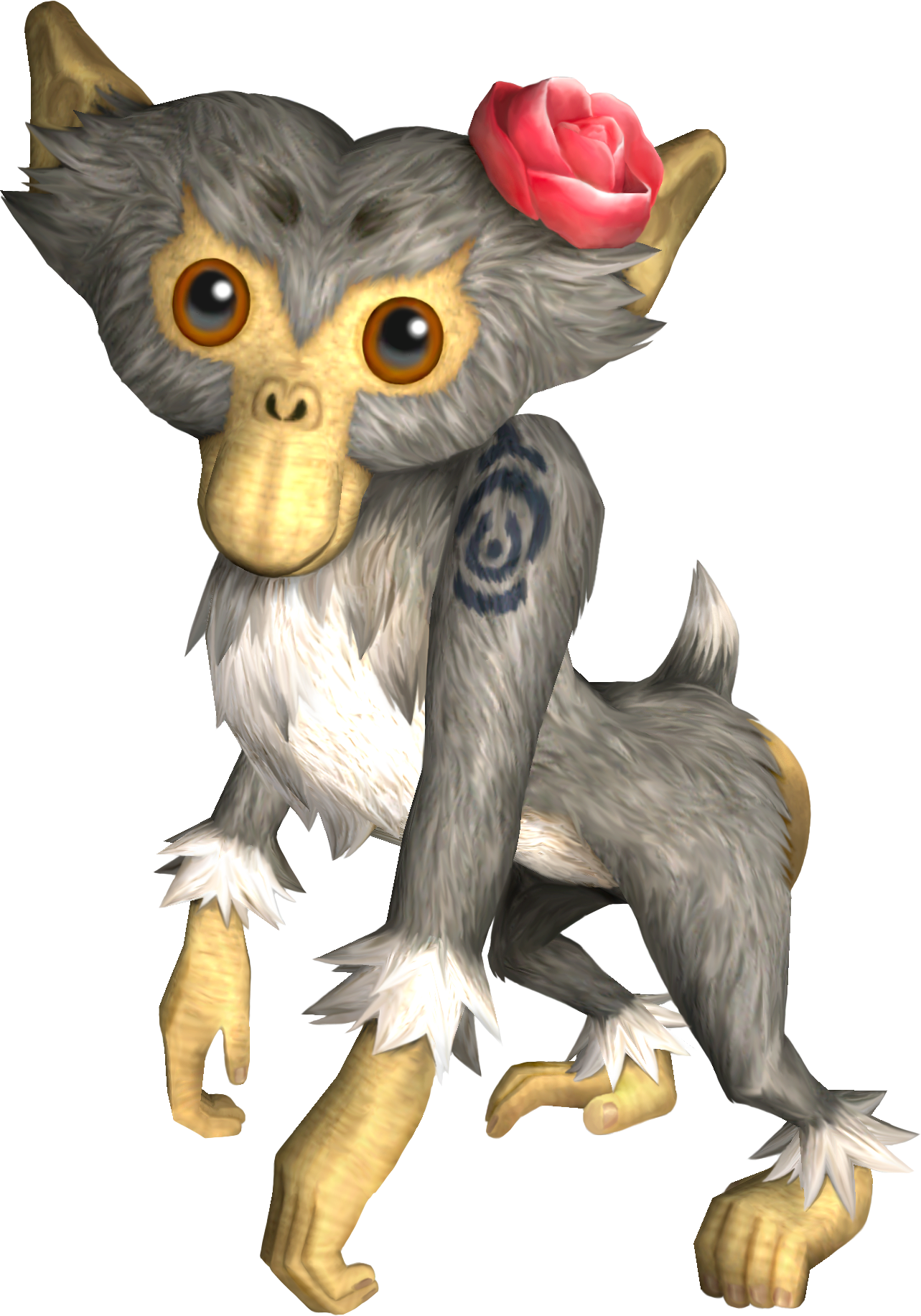 The Female Monkey is a character found in Twilight Princess.

She first appears in Ordon Village where she has stolen the cradle from Uli. She can be seen on a pillar in the distance above the water, holding the cradle. Link can climb up to a nearby pillar and summon a Hawk with some Hawk Grass. Link can then send the Hawk towards the monkey, and it will grab the Cradle, bringing it back to Link. He can then take it back to Uli to get the Fishing Rod.

After Link purchases the Slingshot from Sera's Sundries, he meets with the children of Ordon, just outside his house to train. Shortly after doing us, the Female Monkey makes an appearance, causing Beth, Malo, and Talo to run after her. Link gives chase and finds that Talo has traveled deep into the Faron Woods chasing after the Female Monkey. Link will catch up with Talo and the Monkey in North Faron, where they have been captured by enemy Bokoblin. Link will defeat the Bokoblin and save the Monkey and Talon.

When Wolf Link is collecting Tears of Light in North Faron, he will see the Female Monkey just outside of the Forest Temple. She is standing on top of a smaller pillar, scared of the two Shadow Insects that are nearby. After Link clears the area of insects, the Monkey will talk about how her boss, Ook, has gone funny in the head, and there are now scary monsters everywhere.[1]

In the first room of the Forest Temple, the Female Monkey has once again been captured by some Bokoblins. After defeating the enemies and freeing the monkey, she will now follow behind Link has he progresses through the early portion of the dungeon. She serves as Link's guide, regularly running up to doorways, encouraging Link to follow behind. She tries to take Link to her boss, but Ook uses the Gale Boomerang to destroy the bridge. Link will then need to use the help of the Female Monkey to navigate the forest Temple, and find her fellow monkey friends.

After saving three other Monkeys, Link can return to the broken bridge and can use all four monkeys to swing across the gap. Later in the dungeon, after Link has rescued all eight monkeys, they create a giant swing, which carries Link across the gap where he can then take on the dungeon boss, Diababa.

After Link has completed the Lakebed Temple, he will return to North Faron Woods as Wolf Link and will run into the Female Monkey once again, where she will be ambushed by several enemy Puppets. After clearing out the Puppets, the Female Monkey thank Link and let him know that there is wooded area on the other side of the nearby cliff, indicating the proper direction Link must travel to reach the Sacred Grove and find the Master Sword.[2]