From Zelda Dungeon Wiki
Jump to navigation Jump to search
Want an adless experience? Log in or Create an account.
Hawk 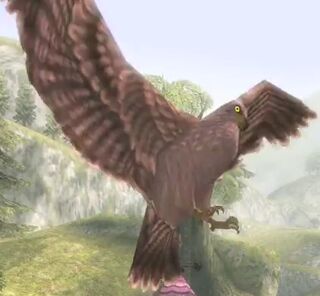 The Hawk is an animal seen exclusively in Twilight Princess. They are summoned by a type of grass, called Hawk Grass. Once called upon, a small cutscene takes place, where the Hawk comes out from the horizon and lands upon Link's arm. Link can aim the Hawk using the pointer on screen to solve certain puzzles in game. The Hawk in Ordon Village is seen as a form of protection, as Hanch calls upon it to attack Link while in Wolf form.

During the prologue of the game there are a series of tasks that Link completes in order to obtain the Slingshot, two of these tasks involve Link calling upon the Hawk. Jaggle asks Link to climb up onto the small cliff with him, he then tells Link how to use and summon the Hawk. Link must aim the Hawk to knock down the beehive hanging from a tree in the village. This allows Link to obtain Bee Larva, which he can later use for bait. Link also uses the Hawk on a separate platform to retrieve Uli's cradle, which had previously been stolen by a Monkey from Faron Woods. When returning the cradle to Uli, she rewards Link with the Fishing Rod.

When escaping his imprisonment in Hyrule Castle, Link now in Wolf form and aided by Midna has to return to Ordon Village. Midna asks Link to retrieve a sword and shield. Since Link is now in Wolf form, the people of Ordon see him as a beast. The villagers are now very hostile towards him and Hanch summons the Hawk to try and attack the young hero. Sera's Cat tells Link to sneak up behind Hanch, thus preventing him from using the Hawk.

Later on in the game when Link is trying to obtain the Master Sword, he has to pass through the Sacred Grove. As Wolf Link he is able to howl at the Hawk Grass and this once again summons the Hawk. Though the Hawk doesn't serve much purpose here it can be used to point out secret areas.