From Zelda Dungeon Wiki
Jump to navigation Jump to search
Want an adless experience? Log in or Create an account.
Puppet Zelda 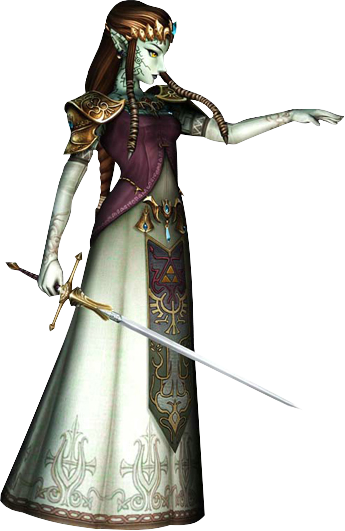 Ganon's Puppet: Zelda, often referred to as simply Puppet Zelda or Possessed Zelda, is a boss of Hyrule Castle in Twilight Princess. Once Link climbs to the Throne Room of Hyrule Castle, Ganondorf possesses Princess Zelda and the battle begins.

Puppet Zelda will float around the air and unleash three attacks at Link. The first is a simple sword dash towards Link, which can be easily blocked with the shield. When she hits you though, you will lose your ability to Z-target her for a second. Puppet Zelda will also summon a giant golden triangle on the ground. If Link is standing in the area that is affected, he will lose health.

Puppet Zelda's most common attack is when she will hold her sword in the air and summon a ball of light. She will then send this ball towards Link. Slash at the ball and it will move back towards Princess Zelda. She will deflect it back towards you. Keep deflecting the ball back and forth and it will eventually hit Princess Zelda. Be careful as the ball moves faster and faster each time it is hit back towards Link. Repeat this same process until you've hit Puppet Zelda three times with the golden ball.