From Zelda Dungeon Wiki
Jump to navigation Jump to search
Want an adless experience? Log in or Create an account.
Phantom Zant 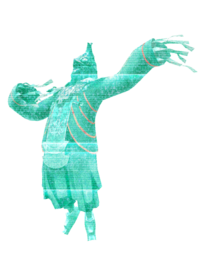 Phantom Zant will start the battle by summoning a Ball of Twilight, which will spawn groups of Shadow Keese, Shadow Beasts, and Shadow Deku Babas. After summoning the ball, Phantom Zant will warp around the room. After defeating all the monsters summoned by Phantom Zant, he will teleport around the room, and stop to summon enemies. This is the best time to attack him, as he will be distracted. Attacking him will also cause him to stop making his ball. He will repeat this process throughout the entire battle. After doing enough damage, he will be defeated, and access to the Sol will be granted.